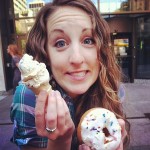 Today I went back to my boxing gym for the first time in a month and a half.

I’m going to be extremely sore tomorrow. I always am.

It’s hard to consistently attend classes because I travel a lot and have a tough time justifying the cost of a month’s membership if I’m only going to be in town for a few weeks here and a few weeks there.

So I drift in and out of the gym, attending for one, two, three months at a time. Then I leave town for a week or ten days, and upon my return to Cincinnati, put off going back to the gym for a gazillion reasons. “I have to leave again in a few weeks.” “I need some time at home to recharge before getting back into the swing of things.” “I have commitments every night this week, so I’ll start again next week.” And the list goes on… and on… and on.

The real problem isn’t traveling and missing days at the gym. The real problem is that I don’t have any sort of method to continue working out on my own when I’m away. Let’s say I’m traveling for one week. Instead of making the time to do the same caliber workouts on my own, I either don’t do anything (the most common outcome), or will put forth a feeble attempt to be active, like a fifteen minute “jog-walk” on the hotel treadmill (you know, the kind of exercise where you don’t even break a sweat but you feel good about yourself because you actually wore the sports bra you packed?). Then I come back to town and put off going back to the gym for another month because PROCRASTINATION. Also, since I haven’t been doing anything active, it’s much harder to make myself start back up again because INERTIA. Thus, whenever I do finally motivate myself to reappear at the gym, gloves in hand and sheepish grin on my face, I end up sorer than that weekend I tried to make snowboarding a thing (but seriously, if you’re learning to snowboard for the first time, don’t make it a two-day adventure. One day of repeatedly falling on your ass is quite sufficient. LEARN FROM MY MISTAKES, PEOPLE).

I went back to the gym today because I realized that if I kept waiting for the perfect time to roll around when I’ll be in town long enough to fully participate in my month-long membership, I won’t start exercising again until November. And even that’s dicey because, let’s be real, once the holidays roll around, everyone’s routines go out the window. So, faced with a decision to go back now or NEVER (for the rest of the year anyway), I chose now. You can start slow clapping. I’ll wait.

Besides trying to build some literal muscle, I’m in even direr need of some discipline muscle. Today was a step in the right direction, but I’m leaving town again in two weeks and won’t be back until September. Will I have the discipline to sign back up for boxing classes upon my return? History says no.

Instead of following my old pattern, I’m going to try these three things to change my habits:

1. Create an actual game plan for staying active on the road: I’m even going to block off exercise time on my calendar! Big deal coming through!

2. Pay for next month’s membership in advance: There’s nothing like the thought of losing money to get me motivated.

3. Plan the exact date that I’m going to return to the gym when I’m back in town: Maybe I’ll throw a party. That means there has to be cake. Does that defeat the purpose of going to the gym? Nah…

This month is going to be the start of building my discipline muscles. I’m going to be extremely sore tomorrow.

But I think it’s going to be worth it…

Psssst! If you live in Cincinnati and are looking for an unbelievable workout, check out Fusion MMA!