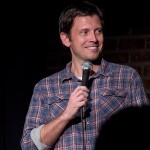 When I was eight years old my family started going to church. There I discovered something that changed my life. I was immediately smitten—head over heels captivated. And nothing has changed to this day. What I found there, I love now more than ever.

But it wasn’t church itself that got me. Through my life I’ve learned that church can be beautiful. The church is where I found my meaning, my best friends … even my wife. But church is also broken. It’s made up of people and people let you down. Beyond that though, it seems somehow systemically broken. It’s beautiful and broken.

What I discovered as a kid was bigger than church—more time tested and thousands of years older. I found the Bible. Just like the church, this book is beautiful. And just like the church, it relies on broken people to be interpreted. To me, it holds the spark of divinity … but it has human fingerprints all over it. For all the good it has done, it has also been used for great evil. And truth be told, it wasn’t the Bible so much that I fell in love with.

It was the stories in the Bible. I remember as a second grader sitting in Sunday School class in Russell, Kentucky hearing these amazing stories. As a kid, they didn’t yet need explanation or application. I didn’t  need a system or theology around them. At some level, all of that is, of course, important. But here’s the thing—the system is secondary. The story was first.

It is Noah in a dark creaking ark 39 days into the storm. It’s Abraham taking the first step on his journey to the unknown. It’s Esau flippantly selling his birthright to his deceitful brother. It’s Joseph stripped of his colorful robe and left to die in the bottom of a well. It’s Moses, blood on his murderous hands, fleeing in the desert, and Moses, blood on his trembling hands painting the doorpost of his home on Passover. It’s Joshua, sword drawn for battle, Samson falling for Delilah’s batting eyelashes, Ruth and Esther showing us that the ancient world was a place where women could lead. It’s David with a sling—David with a crown—and David falling on his face in failure. It’s the prophets screaming at the top of their lungs for the people to turn back to God. And it’s Jesus. From a dirty manger to an old rugged cross. It’s his hands touching the leper, his feet walking on the water, his tears for Lazarus, his blood for us all. It’s resurrection. It’s Peter’s Pentecost and Paul’s conversion. It’s John’s Revelation and streets of gold, rivers of living water and trees of life.

That’s what I loved. That’s what I love. These stories are beautiful and contagious. They’re unexpected and, at times, unexplainable. They’re human and bitter—often more violent than we want them to be and often way more gracious than we could ever imagine. They help us and confound us. We love them and we hate them, but one thing is always true—once we know them … once we have them … they never, ever leave us.

We have seminaries to help us study these stories.

We have churches to a help us apply these stories.

But what do we have to help us LOVE these stories?

These stories are alive. But they are trapped behind church walls and in leather bound books on dusty shelves. Imprisoned by theological systems that are running out of their usefulness. They’ve been taken hostage by haters and bigots and politicians. They’ve been abused and neutered and disfigured. And worse than all of that, they’ve been forgotten.

There’s only one way to save them. It’s to tell them. And to tell them the way they deserve to be told. We have to be rebels. In a world where the people with the most money and power get to decide who tells the stories, we have to be a subversive band of rebel storytellers. After all, these stories have always been a little subversive. They are the stories of a great rebellion and deserve to be told fearlessly by the rebels who love them.

We have a plan to start an experiment—The Bible Experiment. It will only work if we all do it together. For the first time, we’re turning to Kickstarter, a crowd sourcing platform, to mobilize like-minded people. We need money to see this plan happen, but this is about way more than raising money. It’s about linking arms and taking our stories outside of church walls and into the streets.

If you have a few minutes, please watch our Kickstarter video to get a better idea of what we are doing. After watching, you can visit our Kickstarter page to learn more and join what we pray will become a grassroots movement.

Join us by backing The Bible Experiment at this link.