If you inhabit planet Earth, you probably know about The Dress. Last Thursday, someone posted a picture of this dress online: 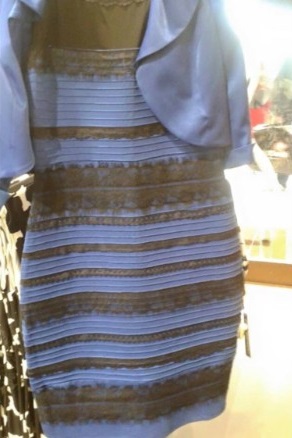 A million articles have been written about the science behind the dress, so feel free to Google those if you’re interested. I’m going to take a more philosophical approach here.

I think The Dress symbolizes something much deeper.

The dress is real. That dress actually exists. You can buy it.

But our perception of the dress is influenced by our unique lenses. Some people opitcally see black and blue. Others see white and gold.

I wonder if there are any lessons to be learned about politics here? Or perhaps faith?

I wonder if there is a God, and if different people use different lenses to experience that God, and if no one is necessarily right or wrong, but instead, our lenses are simply different?

When someone else sees God differently, we get angry and defensive. We lash out and call people names. Why? Maybe we feel insecure. When lots of people were seeing white and gold, I felt like I was going crazy. How could you see white and gold when it’s clearly black and blue? Am I nuts? Is my eyesight screwed up?

Ultimately, with either scenario, it’s easier to stand your ground. Double down on what you can see. Discredit others in order to justify your personal experiences.

I’ve entered a season of life where I’m learning to not just keep my own eyes open, but to also try (in what limited way I can) to see the world through others’ eyes. At the very least, I’m going to keep my ears open, because if I can’t see the world the way others see it, I can at least listen to their stories of what it’s like to be them. For now, maybe that’s enough. It’s at least a good start.

Featured Storyteller
Steve Fuller is a Professor of Communication at the University of Cincinnati and a Rebel Storytellers co-founder. In 2009, Steve completed The Church Experiment, visiting 52 places of worship in 52 weeks and documenting his experiences here. His hobbies include podcasting, eating Graeter's ice cream, having his heart broken by Cincinnati sports, and getting angry at complete strangers on social media, Steve, his wife, and their Cairn Terrier call downtown Cincinnati home.