Dear Cleveland, Dan Gilbert, and whomever else this may concern:

I know I have no business sending you this letter. I live and pay taxes in Cincinnati. I’ve only been to Cleveland a handful of times and I’ve never been to a Cavs game. But I’ve been watching this Grit Squad of yours from afar. And I have to tell you. I am captivated.

Thusly, I’d like to formally submit a long-distance motion for you to start working on the Grit Squad Statue. I don’t have any formal sculpture training. But here’s a quick napkin sketch of a concept. 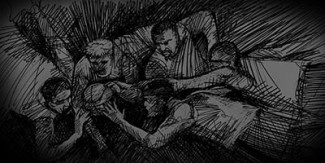 I think a fitting tribute to your band of misfits would be them sprawled all over the ground diving after loose balls. I imagine some day grown men will be seen taking selfies down on the ground next to that bronzed and bruised, bearded-wombat you call Delly.

Every city has sculptures of their Heroes soaring through the air, standing tall, posed perfectly in front of their arenas. But in my humble opinion, depicting the Grit Squad as a sprawling statues lining your sidewalks seems much more like The Land.