My plan was simple enough. Over the course of nearly three weeks touring France, Italy and Spain, I would stop and spend the day at a pre-arranged wine producer photographing and documenting this year’s harvest time.

Wine producer #4 was on my first day in France’s Rhone Valley. The small, family-run estate of Domaine de Boissan is located at the base of the hilltop-fortified village of Sablet. Christian Bonfils has spent over 30 years tending the vineyards that he inherited and purchased. He’s a very relaxed, soft spoken man who struggles with his English. 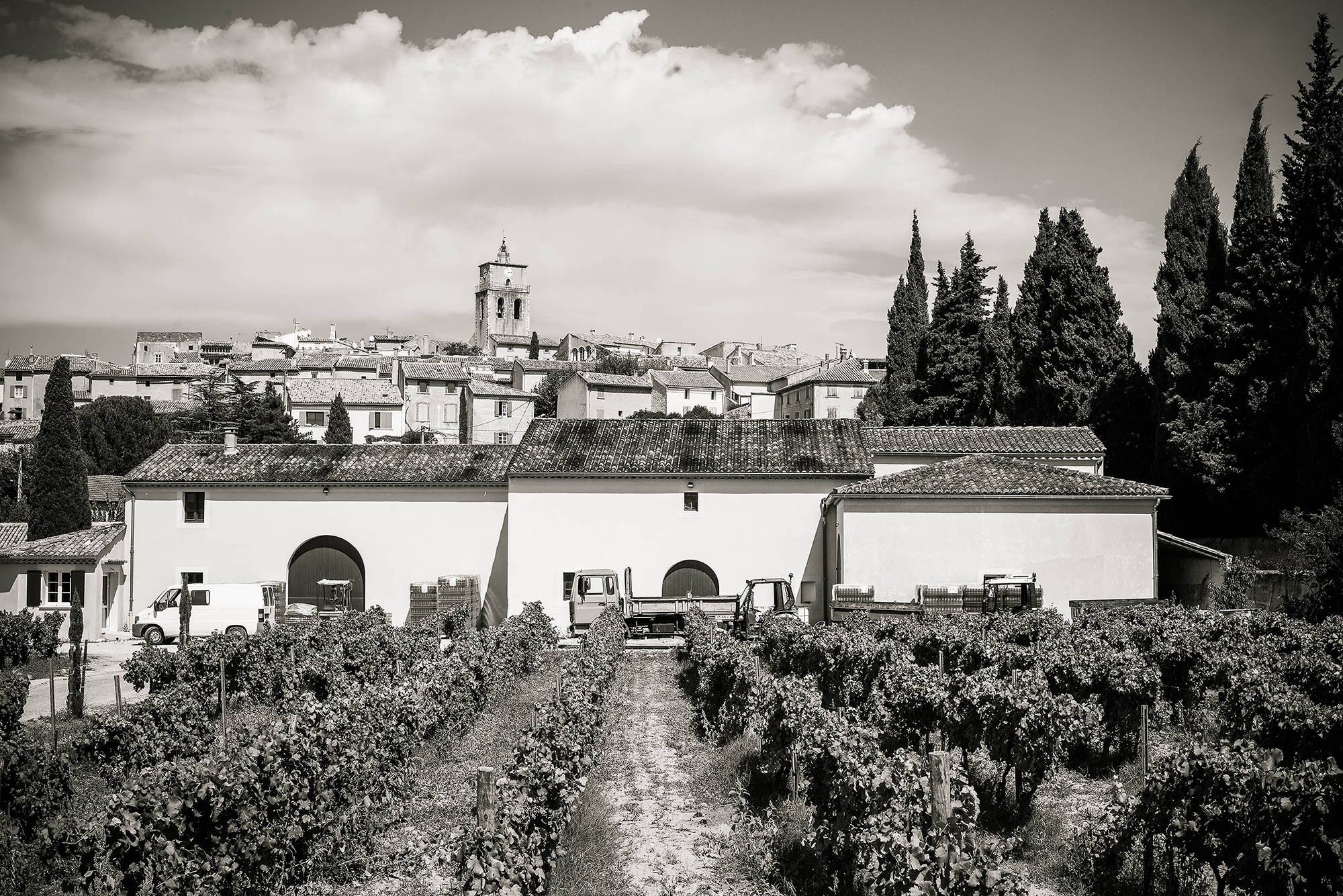 When I arrived, something seemed different as I exited my car and Christian walked out of the cellar to meet me. He was able to explain that his father had just passed away and today was the wake and funeral. There wasn’t going to be any harvesting that day on the Estate. Christian repeatedly apologized that he wouldn’t be able to spend time with me, and I repeatedly reassured him that I completely understood.

Adding to the complexity was the plan for me to stay in their Estate guesthouse. Christian insisted that was fine and also set me up in the office area where I had access to WiFi so I could work.

The property is a small place, and through the office window I had a view of the dirt parking lot, Christian and Kathy’s home to the right, and his mother and father’s home to the left. Throughout the day, I had a front row seat to the coming and going of their friends and family members.

Christian mentioned that we might be able to have a glass of wine together later that evening after family dinner at his mother and father’s house. I insisted he didn’t need to worry about that.

Complicating things for the family was his father’s death coinciding with harvest time. When the grapes are ready, they’re ready. The workload around harvest time is tremendous. The preparation, the harvesting itself, and all of the work in the cellar to get the newly fermenting wines on the proper path often means days of very little sleep. Harvest doesn’t wait for anything. It just happens; whatever comes along in life during harvest becomes part of it. The day before I arrived, they harvested their first grapes, so there was work to do in the cellar the morning I arrived. 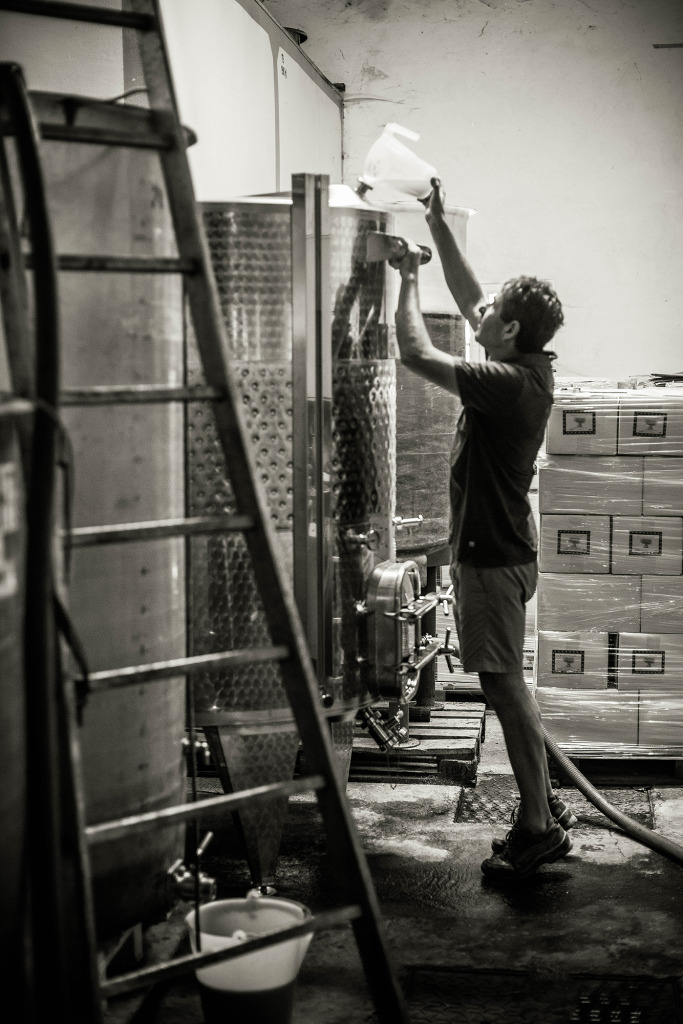 For a couple of hours, I was able to capture a few photos of Christian working the tanks in the cellar with the newly pressed juice from the Viognier grapes, and then helping two ladies from the village choose wines they wanted to purchase. I was constantly aware of how life goes on during a difficult day. Before long, all work in the cellar ceased. People were arriving at the estate and going into his parents’ home. Christian retreated to his home and a little while later, walked out in a dark suit, climbed into his car, and drove to the church. Things became eerily quiet, and I found myself the keeper of the inn, letting both British and French tourists know there were no tastings available that day. 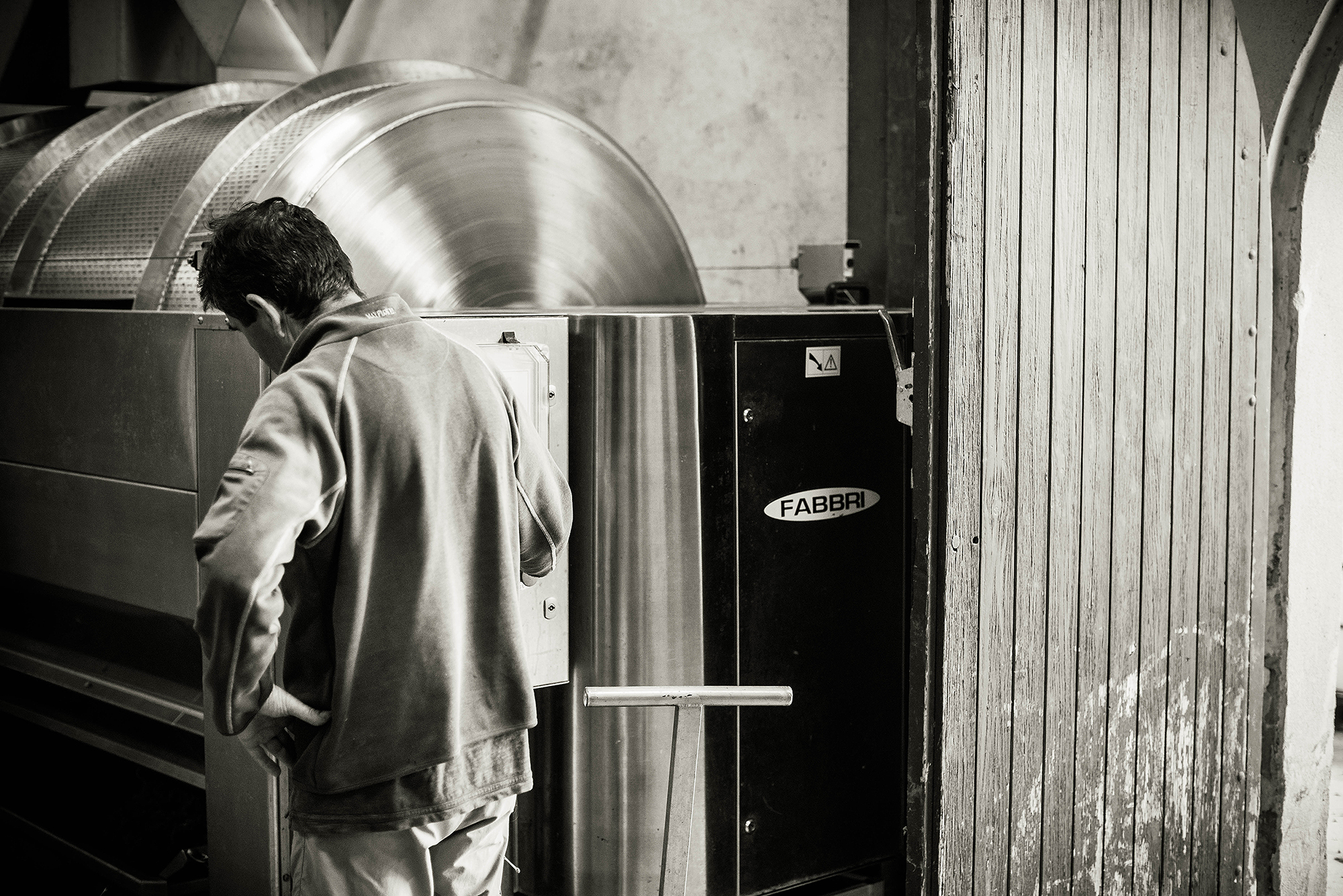 Later in the day, the activity level picked up as family and friends came back to Christian’s parents’ home to spend time together. Sure enough, around 7:00 PM, Christian came into the office and went to the refrigerator. He grabbed a few bottles of chilled rose and white Sablet wine, looked at me and said, “Come, it’s time for wine.” I followed him, assuming the two of us might sit down for a glass and chat for a bit. He led me to his parents’ home and up the stairs to the outside patio. At first I thought he just needed to grab a couple of glasses, but then I realized he was having me sit with the remaining members of his immediate family. He sensed my hesitation; I insisted I didn’t need to be there. He insisted I did.

I found myself in the middle of the remaining dozen members of the family, including his mother, grandmother, and sisters. Very little English was spoken, but a couple of family members engaged me in conversation and asked lots of questions about my life. The table was full of conversation, joking, laughing and quite a few empty bottles of wine. I also learned fairly quickly that they were still yet to have the family dinner. They directed me to my seat at the table. 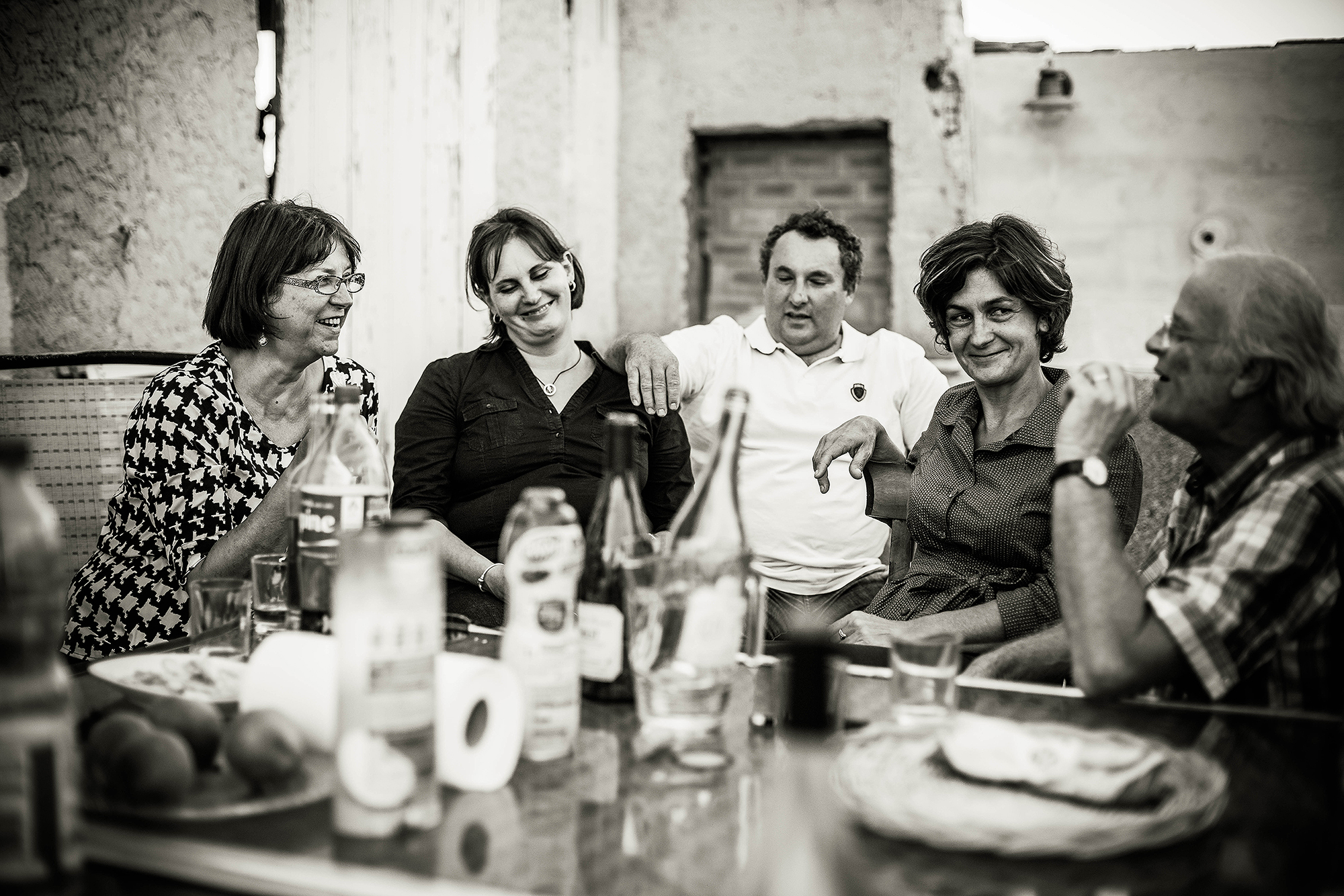 The discomfort I felt at first quickly faded, morphing into to real comfort surrounded by a family together in a house that held decades of memories for them. It was a diverse cast of characters and emotions. Mostly, the evening was filled with stories and jokes, but looks of heartbreak and exhaustion made the occasional appearance, especially on the faces of Christian and his mother. I brought the camera along to his mother and father’s home. Hesitant at first, it probably became the best decision of the day as I captured their togetherness, laughter, and loss. 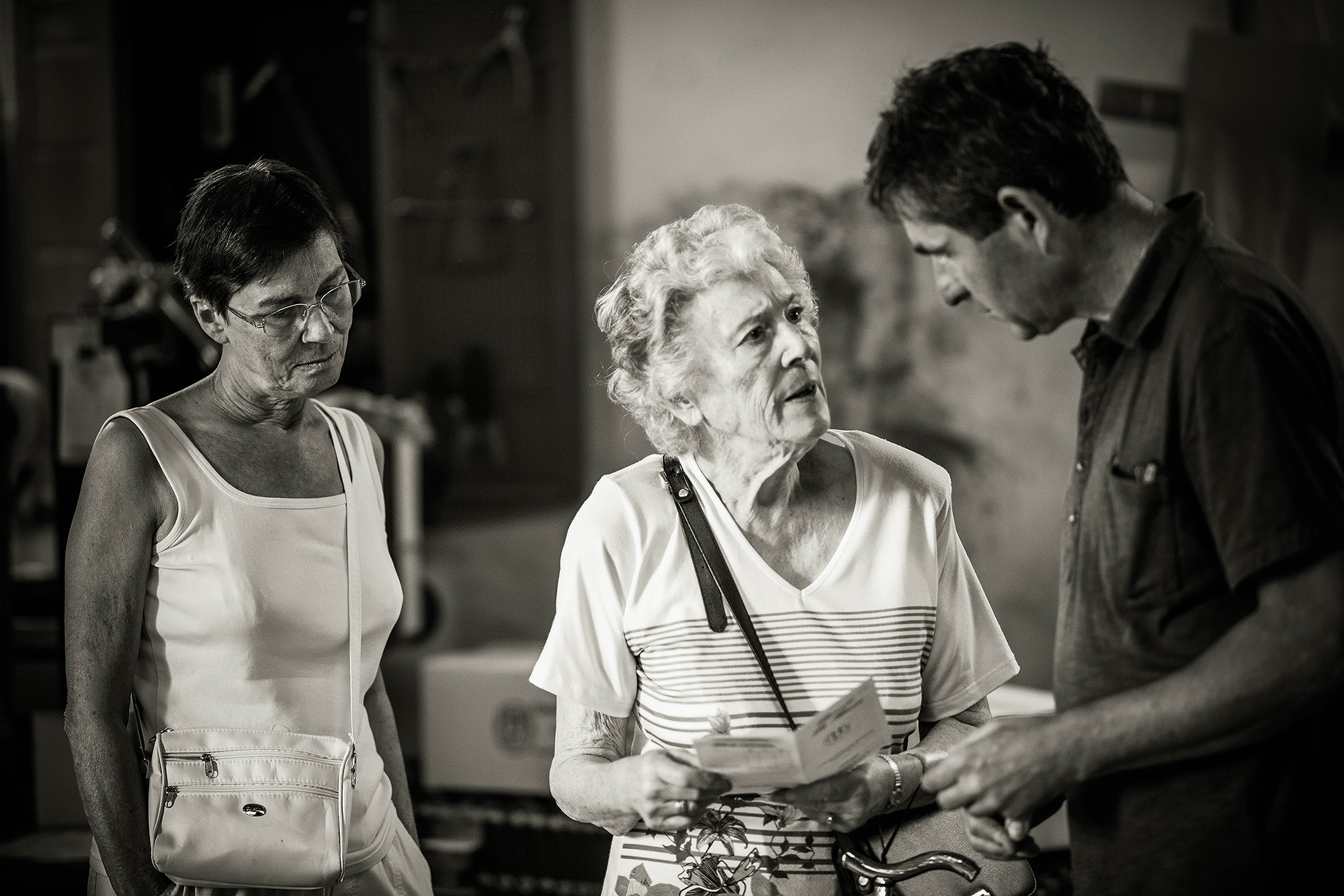 After countless bottles of wine and a wonderful spread of food and laughter, I eventually settled in for a very short night of sleep. After all, the next morning, harvest was resuming and I would at least get to take a few images of Domaine de Boissan during this difficult year’s harvest. We met at eight o’clock that next morning. Christian came out to greet the pickers who arrived on the property that morning and all of us headed to a small vineyard on the north end of town. The morning sun was just beginning to come over the hills, lighting up a beautiful scene as they picked grapes with the village of Sablet on the hill in the background. Something that has been repeated for centuries. 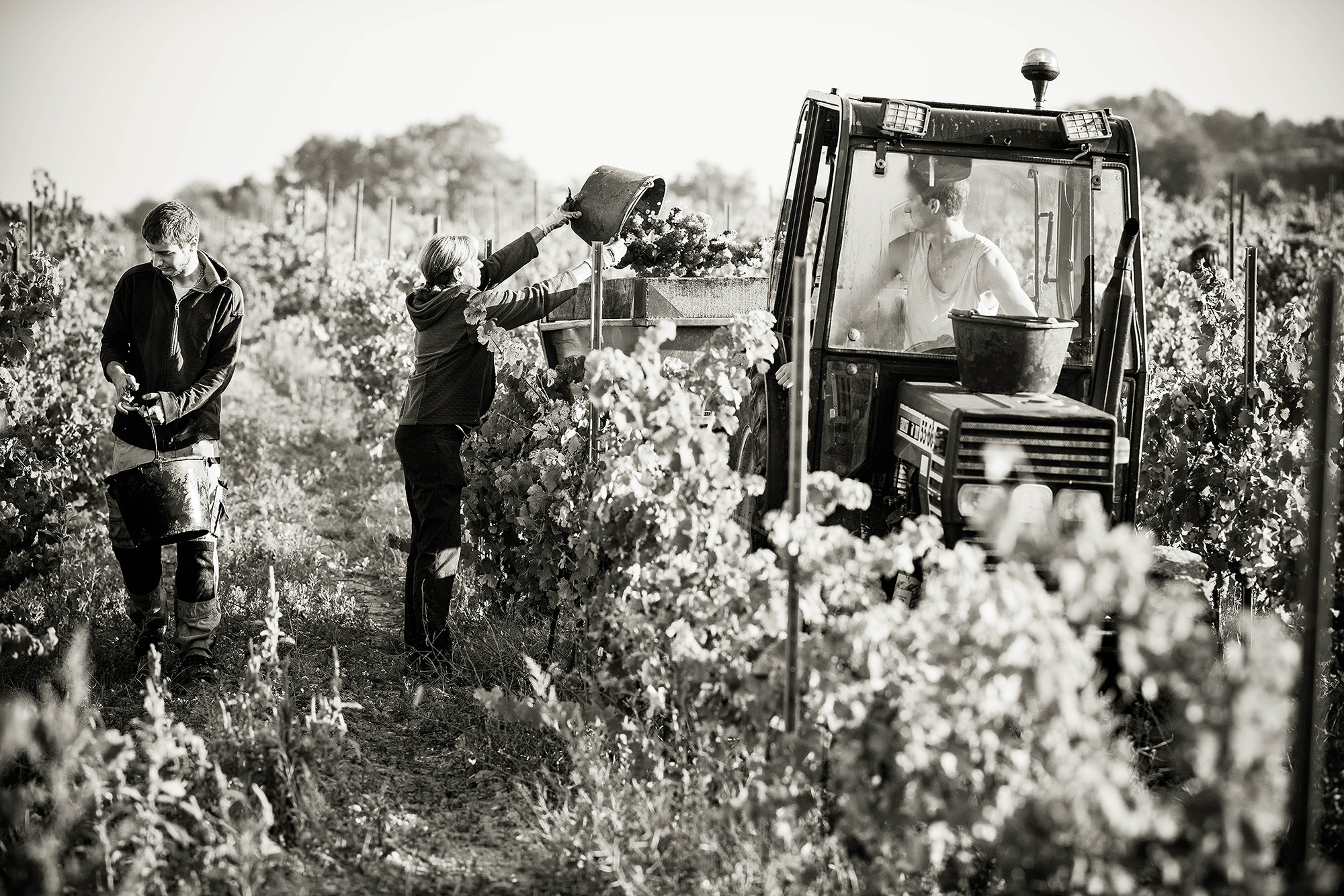 What started as a day that felt like a disaster—as I questioned what in the world I was doing there—turned into an amazing experience that I will always remember and cherish.

Darrin Ballman recently traveled through Europe photographing a dozen different small wine producers as they harvested their 2014 crop. You can view the full collection of photographs, order prints, and host a gallery showing by clicking here.

Learn more about Art in the Harvest and follow along with Darrin’s journey on his blog.

Darrin is pretty much what you might expect to get when you take a native Californian and raise him in the Midwest. Essentially that means he’s pretty laid back, prefers low humidity and ocean breezes, but has a Midwestern accent (as he’s been told). For nearly three decades, Darrin has been focused within the worlds of photography and wine. His wine experiences in California and Ohio have included sales, importing and as a sommelier. Photography has led him from capturing “just about anything people related” to in recent years, exploring the improvisational and documenting what he calls photographic terroir. He resides in the Cincinnati area when not visiting his daughters in California or is off photographing somewhere.